Last week you read about Lily’s experiences of being a summer camp counselor, this time it’s James’ turn. 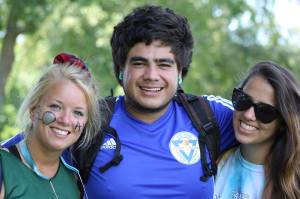 Camp Sloane YMCA. I have been to camp three years now and plan to do a further two.

I needed to do something out of high school and I didnt think I was ready for uni or if I even wanted to go.  So one of my parents said that I should go travel and do something outside the box so there I was in 2011, I went off to camp!

IEP New Zealand and yes I would totally use them again and have even thought about asking for a job! haha

Well my first two years at camp I was in waterfront and it was great! Had the best time. Then this year I was the Junior boys section head – love the role and I couldn’t bear thought of doing something else.

With out a doubt it blew all my expectations.  I was not expecting it to be that great.  I always knew from the get go I would have a great time and meet a ton of awesome people but I had no idea it would be like this.

1. Swim togs (bathing suit), otherwise I’d be getting in the water in my clothes.
2. A ton of clothes! Wow do you go through a lot or what?!
3. GoPro. From now on I wouldn’t leave my tent without it!

Seeing my favorite campers year after year and watching them grow.

BBQ chicken night without a doubt.  Not even kidding I can’t get over how much I like that.  Totally brush my teeth to that stuff.

Well it would be the one I taught my junior boys.  They all know it. Its pretty boss.  Just saying…..

“Proud of you” (in a very cheesy voice, not super serious).

I just stayed in New York for a bit and caught up with friends that maybe didnt go to camp or some I had met along the way.  Also to hang out with the ones you make while at camp.

It made me grow up.  I’m not even kidding.  When I first went to camp back in 2011 when I was 18 , I didn’t really need to worry about anyone apart from myself.  Not saying I was a selfish person, just saying that until I came to camp I didnt really have any intense responsibility of a child or children.  Then when you come to camp you are surrounded by so many.  It really opened my eyes to the person I was and the person I was becoming.

Getting to hang out with the campers! They aren’t just campers they are also your friends.  I’ve known campers now that are next year becoming staff member along side me and others at camp and it’s just awesome.

That no matter how tired, frustrated, weak, feeling like you are about to cry and fed up with something, you need to keep pushing on because at the end of the day.  You aren’t doing it for a pay check or because you are forced to,  you are doing it for the campers.  In the outside world it may not be campers, it could be something else.  But in camp you work hard for them and it makes your camp experience amazing.

Best quote I have ever heard: “Camp will be the hardest job you will ever love”.

2 thoughts on “Camp Counselor of the Week: James Deans”

Get 10% off BUNAC with code SECRETS10