It’s time for another camp counselor interview! Last week you heard about Steven‘s first summer at camp, and now we hand over to Charly, who is about to start her third summer!

This will be my third summer at Camp Sloane YMCA.

I was looking for something to do during my second summer of university and decided to try and work abroad as I wanted a bit of an adventure. I started looking stuff up online, and found a few different things to apply for, one of them was summer camp. I did the application, along with a load of others for nanny jobs in Spain, bar jobs in Greece etc. A few weeks later I was contacted by the agency, I had a skype interview for Camp Sloane and they gave me the job. That was that!

I went through Wild Packs. They are really good at making your paperwork simple, breaking everything down so it’s easy to understand and stuff. Obviously you have to pay agency fees etc, but I think it’s cheaper than some other ones, and you get a discount when you come back as a returner. The only thing I would say is that they have no one there to greet and help you out when you get to the embassy like other agencies do, which when you go for the first time can be a little daunting.

For my first two years I worked in the performing arts department as a regular counselor. I taught dance, drama and music during the day which I loved, and had a tent of seven girls to take care of. Then for this coming summer which will be my third I will be the senior girl’s section head, running a section of seven counselors and up to fifty campers. 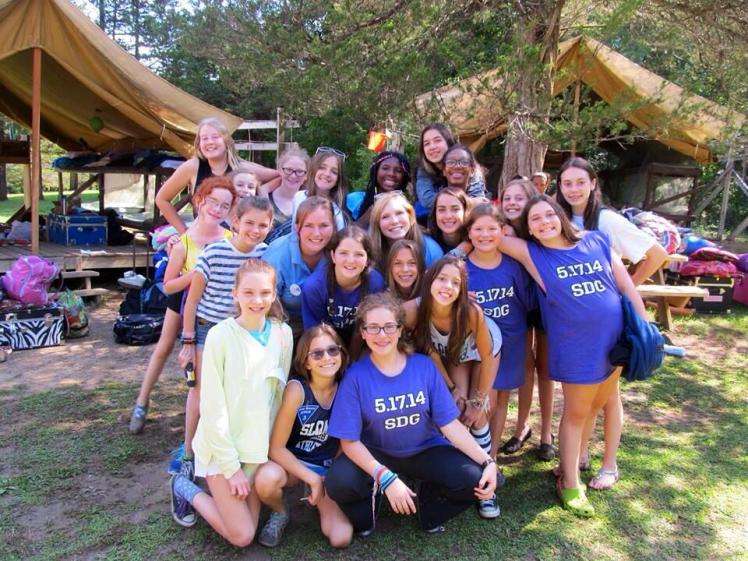 In all honesty I didn’t know what on earth to expect from camp. I didn’t know anyone who’d been before I came and I didn’t know much about it. But it totally and completely exceed my expectations and was the most wonderful experience of my life. I have enjoyed it more and more each summer!

What 3 essential items would you never go to camp without?

A mug. A proper china one. As a Brit I can’t function without a cup of tea in the morning, and it just doesn’t taste the same out of a thermos flask. A tubey grip. Being active all day every day can result in injury, especially if you’ve sprained something before. A watch. So essential as timing is everything, and you often can’t have your phone on you to check the time. And I know it only says three, but a number four would be a teddy bear or a blanket or something to remind you of home, which might sound lame, but it can feel like a long time to be away.

Well this is like impossible to answer, I probably have over a thousand best favourite camp memories. The one that springs to mind though was my first session of my second summer, when campers that I had met the year before returned and came running into section to see me.

Definitely ‘Sloane Girls’ because the whole girls dining hall chants together, it gets the campers so excited, love it.

Well it’s not really a favourite, but it’s certainly the one I hear most. My nickname at camp is Charly, so obviously my campers (and fellow counselors) can’t resist “Charly bit my finger”. Like all the time.

My first summer I did 3 weeks travelling around the states with a group of 6 friends I had met at camp. It was amazing! We went all over the place, it was like a whirl wind. We went from camp back to New York, then got the greyhound down to Washington DC. We then flew up to Chicago for a few days. From there we flew to Vegas where we took an overnight road trip out to the Grand Canyon. After that we did San Diego, LA and finally San Francisco. We had to fly from there back to New York to go home, which was interesting as I had accidentally booked the wrong flight and missed it. Luckily they let me on the plane after a stopover in Dallas, and then New York and then back to England. My second summer I just spent 5 days in New York straight after camp due to limited funds, but that was also amazing as I was with some great friends and I got to see a lot more of New York, getting away from the touristy areas.

I think that camp has made me a more confident and outgoing person, which might sound cliché but it’s true, because camp encourages counselors and campers alike to be themselves. I have never felt more accepted anywhere or at any time in my life, which I am very grateful for.

The campers. Some of the kids I have met during my 3 summers have become some of my absolute favourite people in the world. Also the experience of living and working outdoors in such a beautiful environment.

It is totally exhausting. The first few weeks are a huge shock to the system as you adjust to running at 100% energy levels for 14-15 hours a day, 6 days a week. But it does mean that the nights you spend at camp will be the best sleep of your entire life, and nothing feels better than climbing into your bunk at the end of the day.

15. What’s the most important thing that camp has taught you?

Do it. It takes so much confidence to just up and move to the other side of the world for the summer, but nothing will ever compare to the experience you gain from it. Don’t by any means go into it thinking it’ll be a breeze because it is hard work. It’ll challenge you in new ways and it will change your perspective on so many things. You will make friendships that might only last one summer, or might last for ever, but either way they’ll be amazing. Essentially it is a life changing experience and you should do it now when you have the chance!

One thought on “Camp Counselor Of The Week: Charly Avern”